Is a Consultant a Project Manager?

I have been caught in a dilemma, and have been debating with myself. Contending with the self in the form of a monologue can be quite stressful. I have been playing the devil’s advocate to myself and couldn’t quite decide which self should win. The topic of the debate was this—a little fuzzier being self to self—but I will try to clarify.

Can an individual be a Consultant and a Project Manager at one and the same time? Or, is an approach change required?

Why would such a question strike me so late in the day? I have realized that we get so caught up with familiar terminology like Consultant, Project Manager, Project Lead, etc., we don’t delve deep into the denotations and connotations of the roles defined by the words. We don’t pause to think whether the words mean the same to all the people or if everyone interprets the responsibilities** encompassed within those words in the same way.

I have been agonizing about this distinction for quite some time. This sentence in a mail sent by my friend and colleague triggered a search on the web.

"...in case of consulting, it is mostly one person army. It is my hypothesis. Google to find out more on this..."

The following paragraph from the article, The Consultant's Role, expresses what I have been feeling about a consultant’s role all along. I recommend all read this article, especially the section, How Much Do You Care?

I will quote it here since it supports my view…

“…Many consultants approach the task of giving advice as if it were an objective, rational exercise based on their technical knowledge and expertise. However, consulting is almost never an exclusively logical process. Rather, it is almost always an emotional “duet” played between the consultant and the client. If you can’t learn to recognize, deal with and respond to client emotions (and client politics), you will never be an effective consultant…

…Another prime obstacle to focusing successfully on the other person is the apparently common belief that mastery of technical content is sufficient to serve clients well. It is ironic that a business in which the serving of clients depends so heavily on interpersonal psychology should be peopled with those who believe in the exclusive power of technical mastery….”

I found myself in agreement with this viewpoint. In a bid to appear professional, rational, logical, all the right things of course in a capitalist economy, we forget to think of interactions as inter or intra-personal. Not everything follows a pre-defined set of assumptions.

Now, let’s move on to what a Project Manager does?

In general, the project manager is responsible for the overall success of the project. You could follow the TenStep Project Management Process® and define the project and build the schedule. Does that mean, a PM has less to do with human emotions? No, not at all. Typically, a PM will have Process Responsibilities as well as People Responsibilities. They have to control, be in control, foresee risks, build in buffers, mitigate, plan, etc., etc., and it’s a tough job.

Back to my original dilemma: Are the two roles then mutually exclusive?

Maybe not! But the two roles require very different approaches and a simultaneous application may be unfair to both the roles and diminish the client’s faith in the individual either as a Consultant or as a Project Manager.


A Consultant’s job precedes a Project Manager’s job in the “solution implementation lifecycle”. 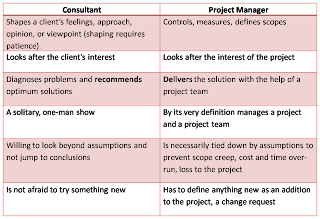 So, is it possible to wear a Consultant’s and a Project Manager’s hat at the same time? I think I have led myself back into the conundrum.
at October 21, 2009