Some problems are so complex that you have to be highly intelligent and well-informed just to be undecided about them. ~ Laurence J. Peter

Recently, while doing a keyword search for complexity, I stumbled across an article called Wicked Problems.  The term was coined by Horst Rittel, the inventor of the Issue-Based Information System (IBIS) structure upon which Dialogue Mapping is based.
The first paragraph of the said article caught my attention. It defines wicked problems thus:

A wicked problem is one for which each attempt to create a solution changes the understanding of the problem. Wicked problems cannot be solved in a traditional linear fashion, because the problem definition evolves as new possible solutions are considered and/or implemented.
Wicked problems always occur in a social context -- the wickedness of the problem reflects the diversity among the stakeholders in the problem.
Most projects in organizations -- and virtually all technology-related projects these days -- are about wicked problems. Indeed, it is the social complexity of these problems, not their technical complexity, that overwhelms most current problem solving and project management approaches.

This description seemed cannily similar to the description of Complex problems in the Cynefin framework.
The article further elucidates the characteristics of wicked problems. I have listed down the characteristics verbatim but the interpretations are mine.
**By this definition, putting a man on the moon and returning him safely to earth was a tame problem albeit with a lot of complexity. It required complex heuristics and problem-solving approaches to come up with ways and means of achieving success; however, the problem per se had a definite end point and it was possible to know when the mission was accomplished.

Wicked problem is compounded or created out of fragmentation. The paper on Wicked Problems and Social Complexity defines fragmentation thus:

Fragmentation can be hidden, as when stakeholders don’t even realize that there are incompatible tacit assumptions about the problem, and each believes that his or her understandings are complete and shared by all.
Since wicked problems defy codification and clear articulation and yet they are the ones that plague the work environments today, a team working on a wicked problem often faces a major issue of collective understanding.
The following image depicts what typically happens: 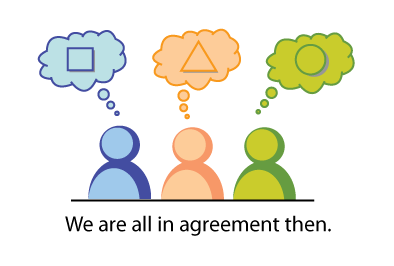 Image taken from: The Agile Warrior

This pain is one of fragmentation because the tools, methods, and approaches used are more suited for “tame” problems—what Cynefin framework slots as simple or, maybe, complicated at the most. What further compounds the problem is that people directly involved in the transactions fail to realize that their tools are inadequate for the issue at hand.
The aforementioned article describes a “tame” problem thus:
A ‘tame problem’ is one for which the traditional linear process is sufficient to produce a workable solution in an acceptable time frame. A tame problem:
The Traditional wisdom for solving problems follows a typical classic Waterfall model. It is linear, logical, and analytical. 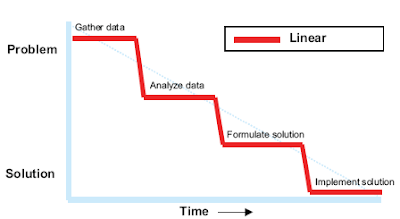 Image taken from: http://cognexus.org/wpf/wickedproblems.pdf
But trying to solve a wicked problem using such tools is like trying to tame a tiger using a dog leash. Wicked problems require creativity, expertise, and sometimes that leap of faith to solve. It also requires adaptive thinking abilities.
The Agile method of problem-solving with its iterative steps, continuous feedback, test driven development and retros come close to an ideal way of, if not solving, at least approaching wicked problem for the following reasons:
The approach, if plotted on a graph would look like this: 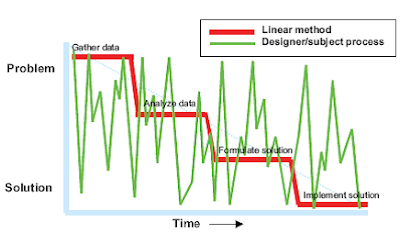 Image taken from: http://cognexus.org/wpf/wickedproblems.pdf
The article describes this jagged line of opportunity-driven problem solving as a picture of learning. And as delineated above, it comes very close to the Agile approach.
To the non-initiated or the inexperienced, this looks chaotic and there appears to be little progress, but the experienced knows that this reflects the deeper order of a cognitive process and learning. The Waterfall method depicted above is a picture of already knowing where one applies pre-defined steps to solve simple or known problems following sequential steps.
- January 08, 2011