Context is King: Excerpts from posts and articles - Part I

For the paste one week or so, I have been reading up on the importance of context as opposed to content. "Context is King" is fast becoming a mantra; hence my focused reading on the topic. Then a tweet by @sumeet_moghe on the same topic today prompted me to put up excerpts of the articles and posts I have been reading here.

The excerpts:
We need context to understand complex issues and this can be provided by those we are connected to. The reach and depth of our connections become critical in helping us make sense of our environment and to solve problems. ~ PKM: our part of the social learning contract

Creating good content on a platform that lets users (teachers & learners) add context may be the the real killer application in education. Content developers and institutions have been so concerned with protecting their content that they don’t see where the real value lies. Letting others add more context will only increase the value of their content. ~ User Generated Context for Learning


The real value of Twitter and other social media (or, the more secure, IT-approved corporate equivalents) is the ability to target messages at specific audiences and tune your filters to the topics that interest you the most. Short fast messaging among people with common interests and objectives can be a real boon to performance and productivity. ~ Marc My Words: OMG, I'm Tweeting!

Most user generated content, is, in fact, context. The bulk of what connected consumers create isn’t content: its context – information about the value of goods and services. Context, in turn, lets connected consumers search and navigate the exploding universe of media more effectively, and massively amplifies incentives for quality.

The tacit resides in action, most often in participation with others. As a consequence, tacit knowledge can be
distributed as a shared, socially constructed understanding that emerges from collaboration. ~ Learning in the Digital Age by John Seely Brown

Legitimate peripheral participation is . . . an analytic viewpoint on learning, a way of understanding learning. We hope to make it clear that learning through legitimate peripheral participation takes place no matter which educational form provides a context for learning, or whether there is any intentional educational form at all. ~ Jean Leave and Etienne Wenger

Teaching from dictionaries assumes that definitions and exemplary sentences are self-contained "pieces" of knowledge. But words and sentences are not islands, entire unto themselves. Language use would involve an
unremitting confrontation with ambiguity, polysemy, nuance, metaphor, and so forth were these not resolved with the extralinguistic help that the context of an utterance provides (Nunberg, 1978).

Learning from dictionaries, like any method that tries to teach abstract concepts independently of authentic situations, overlooks the way understanding is developed through continued, situated use. This development, which involves complex social negotiations, does not crystallize into a categorical definition. Because it is dependent on situations and negotiations, the meaning of a word cannot, in principle, be captured by a definition, even when the definition is supported by a couple of exemplary sentences. ~ Situated Cognition and the Culture of Learning

The notion that news comes in and stories go out — text and photos come in and paper goes out — is an artifact of the means of production and distribution, of course. Now a story never begins and it never ends. But at some point in the life of a story, a journalist (working wherever) may see the idea and then can get all kinds of new input. But the story itself — in whatever medium — is merely a blip on the line, a stage in a process, for that process continues after publication.
…In this new ecology, I think newsrooms will need to be organized around topics or tags or stories because the notion of a section is as out of date as the Dewey Decimal System… Stories and topics become molecules that attract atoms: reporters, editors, witnesses, archives, commenters, and so on, all adding different elements to a greater understanding. Who brings that together? It’s not always the reporter or editor anymore. It can just as easily be the reader(s) now. ~ The New News Process
- November 22, 2010 No comments:

Pecha Kucha: My brief take on this presentation format 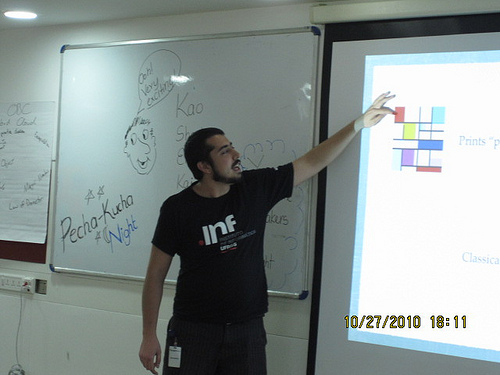 This is a long overdue post that I have been writing in fits and starts and never got around to completing. This often happens with me...especially when I am on a learning spree. I tend to start on multiple things, create chaos in my mind, keep adding to that chaos till my mind somehow sorts them out, and helps me to see an emerging pattern. Till then, I don't try to write anything--hence my long absence from my blog.

Among the multiple new experiences and learning of the past one month, i.e., since I joined ThoughtWorks (a wonderfully chaotic place with a method underneath the madness that is as stimulating as strong black coffee and excellent conversation, and I love both!), I got to see Pecha Kucha in action. I have read about it, seen You Tube videos describing the form, and read posts waxing eloquent about its power, but have never experienced it first hand. Thanks to my friend Sumeet Moghe who has introduced Pecha Kucha nights as a part of the ThoughtWorks grads training program, I not only got to see it but also to participate.

What did I think about Pecha Kucha?
First impression: It reminded me of Bento meals made famous by Garr Reynold's in his Presentation Zen (and not surprising since both come from the same country)--just enough, not more nor less, and filling you just 80%. Therein lies the power of this form. It stimulates you, provides you with just the right amount of scintillating informaiton that leaves you craving for more if the topic is of interest to you.

In it's almost Zen-like simplicity of 20 slides of 20 seconds each, it is an extremely powerful vehicle.

Pecha Kucha as a presentation tool
As a presentation format, it is the next best thing to slice bread (not my line but I liked it...)! The rigour of the format pushes one to be innovative, to keep asking the question "so what", allows for no flab in the content and no slackness in the storyline. Does it hinder creativity? Not at all if one is willing to put in passion and hard work into the creation of one of these presentations. And I have seen some cool ones coming from the ThoughtWorks grads and will share the links at the end of the post. It is almost impossible to get away with dumping 5 bullet points on each slide and present that as a Pecha Kucha presentation. The form cannot be taken for granted. It is finicky to the extreme and demands perfection. The restraints force innovation.
I personally found it useful to create a storyline offline using paper and pencil, weed out the weak links in the story asking the question "so what" as I moved along. Once I had the story down to 20 slides, I looked for images, data and quotes that would support what I wanted to say. Finally, it is about practice...and delivering with passion. And I have miles to go and tons to learn when it comes to delivery. But I would recommend Pecha Kucha to all those who are seeking to learn how to present effectively.


Pecha Kucha as a learning tool
Since I saw Pecha Kucha used as a part of the ThoughtWorks grads training program and being at heart still a teacher, I thought of the values of Pecha Kucha as a learning tool. And realized that there are plenty. And here, I draw from my observations and conversation overheard of the grads who prepared for their first ever Pecha Kuchas.
I went through the same learning curve altho' I write here in the third person. And there is more to learn...a great deal more...

You can see some of the presentations here just for the diversity in passions that drives each one of us...