The Metaphor of Personal Space 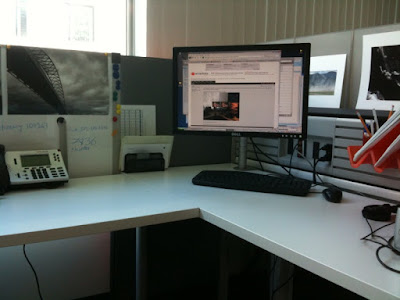 Personal space is a metaphor of our existence!

Here's a little story before I get to the crux of my post.

A few years’ back, in an earlier organization where I used to work, I was sent onsite for about 8~9 weeks. When I came back, I found someone else sitting at my workstation. Initially thinking this to be a temporary arrangement, I was deeply hurt to find out that the arrangement was permanent. However, chiding myself for being childish, I wandered around in search of an empty workstation. Feeling as I had felt on my first day in office—lost, confused, rootless—I wondered why it affected me so.

In retrospect, I realized how that incident had almost symbolically marked the beginning of my disconnect from that team. Till the end of my stay there, I could never regain my sense of belonging.

The incident came back to me today as I sat leafing through one of my favorite books, Dan Pink’s A Whole New Mind during one of the fever recession periods normal in Typhoid.

In the book, he talks about the importance of Design and the value that titans such as Karim Rashid and Philippe Starck add to human life. They have moved beyond the merely utilitarian and have added significance to the daily, mundane articles of human existence. Imagine this: “Target and other retailers have sold nearly three million units of Rashid’s Garbo molded polypropylene wastebasket. A designer wastebasket!”

This need for beauty and elegance, of leaving a mark of our individuality is an essential part of being human. Think of the cave dwellers who painted their tales of valour and passion on the walls of their caves. Think of the remote Warli tribes who simply narrate their lifestyle on mud, charcoal and cow dung based surface.

People project their identity on to the space they occupy—be it their home or their workspace. Many are willing to pay shocking amount of money to interior designers to create spaces reflective of their uniqueness and individuality. In this way, the space surrounding us becomes the metaphor of our existence.

How often have you walked around your office and on encountering empty workstations of friends or colleagues, commented: “Look at all those Dilbert artifacts! Only L would have a workstation like that.” OR “Those crazy post cards are so typical of A.” The workstations are redolent of a person’s distinctiveness, identity, and sense of belonging.

When we visit a friend’s home, we associate the place with his/her uniqueness. I have a friend whose washbasin is a designer piece with a flower in the middle that acts as the water outlet, and who prefers a wine cooler over a refrigerator in his kitchen. Coming from anyone else, this would have seemed an extremely odd behavior but coming from S it reflects his personality to a T.

Anyone familiar with Maslow’s Hierarchy will immediately note that these are directly linked to the Social Need for Belonging and the next level of need, that of Identity.

This brings us back to the importance of Design as the metaphor maker. The design of the space surrounding us is who we are because we fill it with personal metaphors. “A large part of self-understanding,” says George Lakoff, “is the search for appropriate personal metaphors that make sense of our lives.”

Going back to my little tale, since I was moved from workstation to workstation, I could not personalize any of them. I never stayed in one place long enough to build a connection. I used these workstations merely to keep my laptop and complete my day’s tasks, sometimes preferring to work from the privacy and peace of my home.

And each time I passed my original workstation and saw my key chain dangling from the drawer, I felt a small ache. My daughter had bought that key chain for me on one of our trips to Crosswords.
- March 21, 2010