Corbett was our final halt, and definitely a fitting end to this year's Big Cat Trail.

Five o' clock in the morning saw us at the small, quaint station of Ramnagar.  We had boarded our train the previous night from Delhi. The short, comfortable ride was a nice experience. 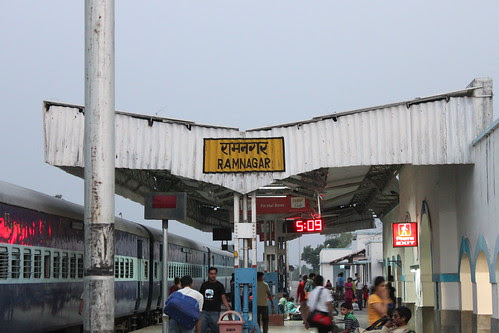 Our jeep awaited us at the station and soon we were off-- headed towards Dhikala, where we had managed to get a night's stay. Getting bookings at Dhikala had proved to be an overwhelming and frustrating task accomplished only through Sumeet's perseverance, patience, and I guess, sheer will. Having stayed there, I can only say that I am immensely thankful we got to stay at Dhikala. Without Dhikala, the Corbett experience would have been very different. Disappointing perhaps... Dhikala turned it into a dream. Situated about 60 km inside from the gate, any visit to Corbett would be incomplete without a stay at the Dhikala Lodge.

The drive to Dhikala from the gate took about 2 hours...and that was our first taste of the forest. Corbett is completely unlike any forest we had visited so far. Nestled below the mountain ranges, it is cross-crossed with mountain rivers flowing over rocky beds. These are breathtakingly beautiful, even in the height of summer when the rivers had mostly run dry. This exposed the underlying beds of multi-colored stones weathered and smoothened by the years of rain, sun and shine. The sun's rays falling on these made them glisten like semi-precious jewels, of intriguing shapes and sizes...I was completely enamored. They varied in shades from purple to pink, grey to ochre. I particularly loved the violet ones with a hint of white on them... 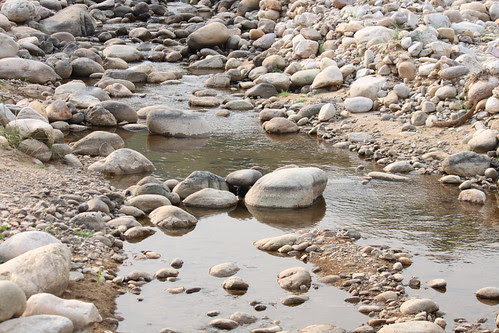 On our way we stopped at the Crocodile Point-- a spot above a river from where one can spot crocodiles... We were lucky to catch our first glimpse of one resting on the bank...looking like a log of wood to a large extent. As we went in, I was torn between marveling at the beauty of the forest and looking out for any wildlife that may cross our path. Corbett is also well-known for it's bird life, and this added to my sense of anticipation. We saw a group of four Oriental Hornbills fly overhead--they caught us by surprise and unfortunately, we weren't prepared with our cameras.

In spite of it being Mid-May, this forest still retained its foliage and greenness. I could only try to imagine how dense it would be post monsoon. No wonder everyone had said that spotting the big cat in Corbett is extremely difficult.

We reached Dhikala around  10 am and headed straight for a sumptuous breakfast. We had the rest of the morning to laze about till our afternoon safari at 4.00 pm. I meandered around the lodge area which is pretty large. It overlooks an enchanting river-bed which was completely dry and formed a sand bank at this time of the year. I was to find out later how beautiful it looked in the moonlight, the whole sandscape turning into a shimmering bed on which the trees cast their huge, dark shadows. It requires a much more proficient writer than I am to capture that beauty in words. All I can say is I could have happily sat there gazing into the night watching the play of moonlight on the sand. 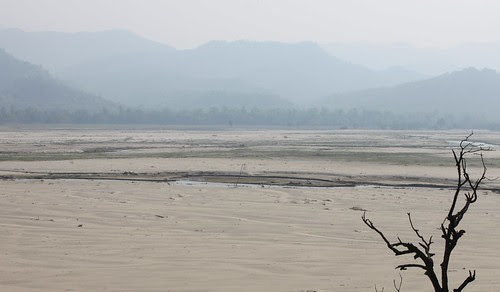 The first safari into Corbett was much awaited by all of us. As our jeep rolled out of the Dhikala gate into the forest, I found myself trying to absorb the feel of the forest with all my senses. Corbett, I realized, had a very distinctive scent made up of dry woods, crushed leaves and the foliage around us. Maybe, other forests do too, but it was in Corbett that I became acutely conscious of this. It was heavenly, almost intoxicating. As we wound our way through, looking to spot bird or mammal, I was constantly pulled into this world of heady fragrance. 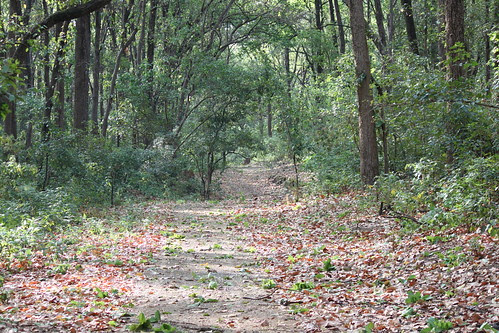 Corbett, we found, is also known for its herd of wild elephants which apparently are prone to charge safari jeeps. Our driver and guide were both on high alert for these animals and regaled us with tales of how they had been caught between a charging elephant in the front and a herd of them at the back. Anyhow, the stories failed to alarm us and we were eager to see a herd. And we did! A huge herd was crossing the meadows when we reached the spot affording us a good view. Later we saw a huge Tusker heading into the forest, pausing now and then to shower himself with sand. It was an impressive sight. 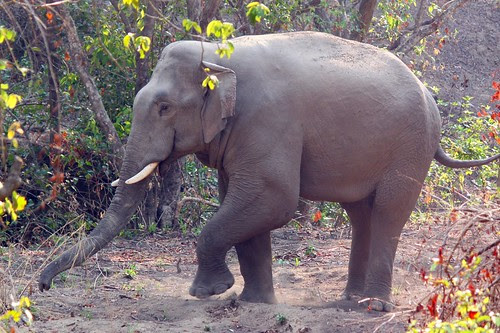 That night was an experience I will not forget soon. Around 3 in the night, I woke up to flashes of blinding lightning and an incessant sound of thunder. Rain was falling in sheets...it was an awe-inspiring sight. I stood at the window which very fortunately overlooked the sand bank. The zig-zagging, near blinding flashes would light up the entire scene for long seconds to be followed by ominously loud crashes of thunder. In those seconds of lightning, everything was eerily illuminated-- the sand bank gleamed, the trees looking ghostly in that white light, while the rain lashed down. This high-drama of nature continued for the next two hours and then stopped as abruptly as it had begun. I stepped out around 5.15 am and was greeted by a sparkling clean world, strewn with fallen branches, torn and crushed leaves, and a strange silence. After the night's rampage, the birds were still to start their morning chirping...

We went for our morning safari a little tentatively, our guide warning us that there may not be much to see after such a night. Soon after, belying his words and living up to its reputation for being unpredictable and fickle, nature decided we should have our first glimpse of the big cat in Corbett. She had been sitting on the side of the road down which our jeep traversed. We had missed her because of the dense foliage and had gone ahead. Just then, our guide caught a glimpse and urgently asked our driver to reverse. This caused us to inadvertently block her path and she went inside the undergrowth. We waited not really knowing whether she would make an appearance again. However, her mission of crossing the road was evidently uppermost in her mind. A few seconds later she sprang out--that is all I can say--on to the road, mock-growled at us perhaps for causing her that slight delay, and vanished into the other side with a leap. It was all over within seconds. I think I had stopped breathing and taking a picture had not remotely occurred to me. She was gorgeous...a true Royal Bengal Tigress.

We continued with our safari, pausing to see the avifauna life. We did not see anymore of the big cats in Dhikala but we were not disappointed. Later in the day, we went over to Bijrani, which is much closer to Ramnagar station and hence, gets crowded. It doesn't match up to the Dhikala experience. Nevertheless, the safaris into the forest are always beautiful. This zone is not as replete with birds and other mammals as the Dhikala one but we did see the big cat.

What bothered me were the kind of tourist who came in. They seem to be coming with something like a circus show in mind. Noisy, insensitive to wildlife, and raucous, they detracted from the environment. The forest guides did not seem well-equipped to control tourist behavior. I do think there needs to be an educational program put in place that tell tourists prior to entering the forest, how to behave, what are unacceptable behaviors and the penalties for the same, what to expect, and what wildlife means. And this should be a mandatory part of the safaris. This would also be a good way to raise awareness about wildlife and their status in general.

This is becoming an endless post, and I have not even touched upon the different birds we saw from the red-collared doves to the dollar birds and emerald doves. I think I should wind-up now. Corbett should be on all wildlife lovers list of must-visit forests. It offers one of those rich, unique experiences that is difficult to forget. I am waiting to go back again... 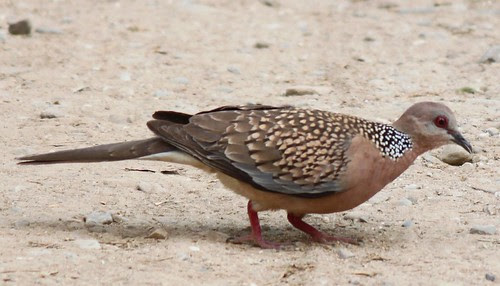