Our next destination was Ranthambore. Just the thought of visiting any forest is enough to add bliss to my existence. But Ranthambore is extra-special. It is home to the legendary tigress, Machhli. This is the forest that Valmik Thapar and Fateh Singh Rathore wrote about exhaustively. I almost felt I knew some of the tigers there. I couldn't wait to see it. 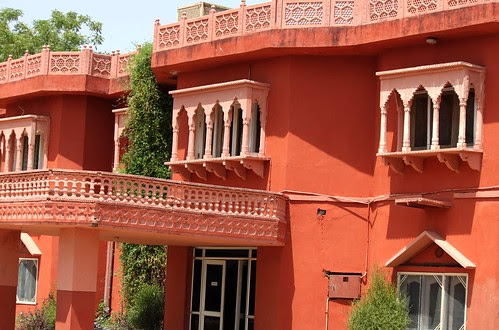 We arrived at Jaipur in the middle of a hot summer's afternoon. The sultry, hot air physically hit us as we left the precincts of the station. From the station, it was an odd 180 km drive to Ranthambore. I won't touch upon the onward drive, which was eventful in its own way. That will just deviate from the focus of the post. Suffice it to say, we arrived at Ranthambore in time for our evening tea. We were booked into a hotel called Hammir. Made entirely of red- bricks, it was a quaint old place. Somewhat ramshackle and run-down, it had a charm just because it was not too posh and perfect. I loved it. It had a certain old world ambience that blended into the surroundings. The long, broad verandah outside our room was reminiscent of the terrace at my ancestral home where I grew up. I experienced a moment of instant affinity.

I waited for the morning with impatience, trying to imagine the forest in my head not quite successfully. Finally, it was time for the safari and we set off. On our way, we passed a couple of antelopes grazing by the roadside. I felt we had finally arrived.

Ranthambore took my breath away. A forest of contrasts, beauty and elegance, it was picture perfect. It is a forest that can inspire poets and dreamers. Sheer rock faces rise on one side, while the other side is flanked by the Ranthambore fortress. At least a 1000 years old, this majestic old fort adds to the unique charm of the place. The forest proper is a valley nestled between the cliffs and the fortress. As we wound our way in, our safari jeep tilted at impossible angles most of the time because of the rocky terrain, I mentally saluted the driver for his superb control. Clinging to my side of the jeep, I could only marvel at the spread of breathtaking beauty. It felt a bit like falling in love at first sight where the breath is knocked out of you, and you surrender to your senses. For some inexplicable reason, I was reminded of Foreter's A Passage to India... 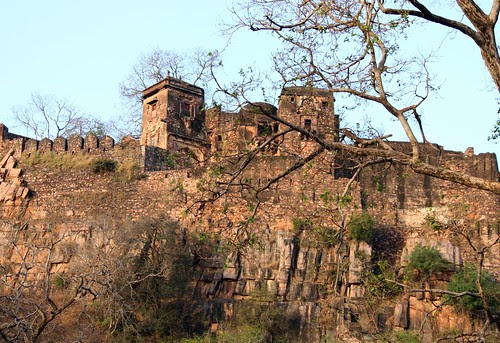 Our first drive led us towards the Rajabaug lake. This is akin to the jewel in the crown. Glimmering and glittering in the sunlight, the lake had water even in the height of summer. In patches yes, but this was enough to drive the fauna of the forest towards it. It is home to a host of birds who clustered around the edges of the lake in search of food, shade or just to slake their thirst. They were in constant motion--flying, fluttering and hopping from spot to spot. We would suddenly see a flock of Alexandrine parakeets fly off in a flutter of green... A group of Treepies would swoop down clamouring for attention. It was a magical place.

Far away, in the centre of the lake was a tiny fort kind of a structure, a quaint remnant of the past. In this lay a tiger, fast asleep. Far from the madding crowd with nary a thing to disturb him there. To be very honest, I could barely spot it with my naked eye. But my camera caught its stripes.

I could have spent days just hanging around the lake. But we had to move on. The drive around the forest gradually revealed its beauty. The flora at this time was dry and skeletal divested entirely of its foliage. This barren starkness threw the fort and the cliffs in the background into sharp focus. What would have, at other times, been covered in dense greenery, was now revealed in all its majestic glory. The sunlight cast mysterious shadows on the cliff walls that I can see in my mind's eye even now. I am too amateur a photographer to have been able to capture that beauty.

Ranthambore has a rich variety of avifauna life that thrilled us. Birds like the Rufous Treepie are so abundant and so fearless that we could photograph them in evey conceivable pose to our heart's content. 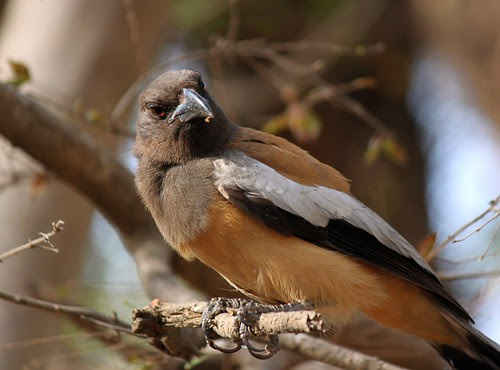 While the first day's drive did not reveal more than a tantalizing glimpse of the tiger, I felt replete. I was unaware of the drama that would ensue the next day. It was on our final drive into the forest that we had our real tiger sighting, but oh what a sighting it was.

As we drove in for our final safari, we wound up at a spot that seemed to be buzzing with human activity. Jeeps were lined up bumper to bumper with hardly a spot to maneuver in. There must be a tiger in the vicinity, declared Saad, our guide. We had also arrived at a similar conclusion and held our breath in anticipation. Earlier Sumeet had declared that we would see a tiger in this safari, and his prediction seemed to be coming true. As we inched our way upward, we arrived at a point where we had our first glimpse. A male tiger was sitting with his back to us, resting from the heat. There is a tigress on the other side, can you see her? Asked our guide. With the uncanny understanding developed through years of driving in the forest, he knew exactly where to park our jeep so that we would get the best possible view (second best given that Priyanka Vadhra's jeep was there). Anyhow, we got a good view. And the sighting that unfolded before our eyes made me forget the presence of everyone else.

The tiger and the tigress were sitting at opposite ends of an open, grassy space. Each had appropriated a tree and was sitting under its shade. The tiger made a point to raise his head every now and then and taking a quick glance to ensure his tigress was still there. Then, he would just flop back, overcome by the effort in this sultry heat. Finally, she got tired of waiting for him to make a move and sauntered over to where he lay. What followed was an amazing display of love and affection between these two inherently solitary animals. The memory of it can give me goosebumps even now. They rubbed and nuzzled against each other, indulging in playful love bites. I watched spellbound. I think during those few moments, there was a collective withholding of breath...It was too beautiful and had a poignancy that made my throat ache...The thought that we might be driving these animals towards extinction was unbearable. 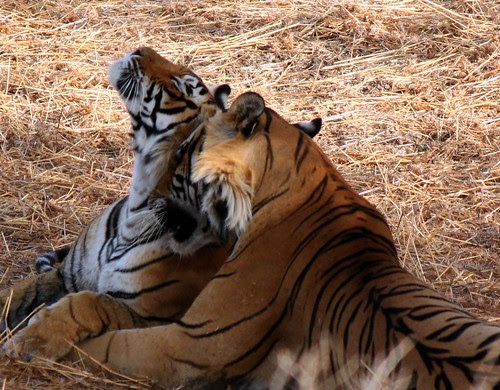 Just that afternoon before coming from the safari,  I had bought a painting from a nearby store of two tigers nuzzling each other... I had wished we could see something like that in real life. The painting seemed to have come alive for me.

The final safari at Ranthambore left nothing more to be desired except a deep wish to come back to this place again someday. And a fervent prayer that we will be able to check the deadly march towards extinction--of the tiger and other wildlife that are our legacy and pride.

Some of the photos are here...