Sumeet and I headed toward Gir in Junagadh after our Kanha trip. The contrast between the two forests couldn't have been more shocking, and I am not referring to the fauna here. Let me explain a bit.

I have experienced Kanha in November, when it is still lush from the monsoon showers. The subsequent dry months hadn't yet been able to banish the green. In comparison, Kanha in May seemed incredibly dry to me. Most of the lush, green foliage was replaced by reddish-brown leaves; nevertheless, since the deciduous sal forest is liberally interspersed with evergreens, the forest still retained a semblance of greenness. After this, Gir came as a shock.

For miles--as far as the eyes could see--we saw nothing but stretches of leafless, brown trees--rather their skeletons to be more accurate. It didn't seem possible that this barren, stark landscape could also be a thick, foliage covered forest during other seasons. Interspersed with these skeletal trees were brambles and thorny bushes. The earth was varying shades of brown--occasionally turning to a brighter yellow here and there. The dominant color of the landscape was brown. Miles of it. This kind of bone-dryness must be seen to be believed. It has a beauty all its own; the very starkness lending it an air of mystery. 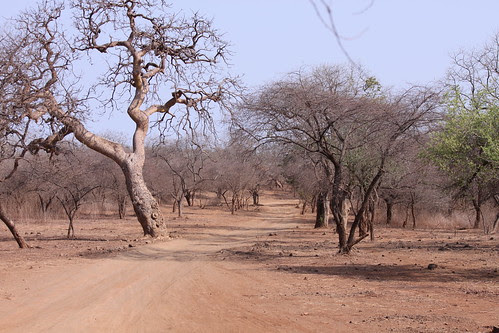 Just as I was trying to accustom myself to this first sight of Gir, a peacock flew by and perched on a nearby tree trunk. The contrast couldn't have been greater. The colorless and barren background enhanced the hues and shades of the living beings manifold--bringing everything into sharp focus. The peacock shone a brilliant blue--a perfect photograph moment. I settled down for the forest to reveal its surprises.

The biggest surprise that Gir had in store for me were the trackers. While I had read a bit about them, I was completely unprepared for what I eventually saw. The trackers play a unique role in the Gir ecosystem. They keep track of the lions by walking or cycling around the forest armed with nothing more than a simple stick. Their courage will put any self-proclaimed hunter to shame. Their job is to keep a lookout for any lion who might be ill or injured; their constant patrolling also keeps miscreants at bay. I saw them stand barely five feet away from a full-grown lion, totally unperturbed. I don't think they thought of it as a display of bravery; for them it was just a part of their daily routine.

The trackers also communicate the location of lions to the guides making it easier for wildlife enthusiasts to watch these beautiful animals in their natural surroundings. Bali, our guide, had promised us that he would show us lions till we wanted to see no more. However, not wanting to see anymore being an impossibility for an animal lover, I must say that we saw lions to our hearts' content. 28 of them...

Lions are social animals unlike tigers who are solitary and secretive. This characteristic makes lions not only easier to spot but also easier to photograph. One can be within 6 feet of a lion without him or her making any move to go away. We saw prides of lions sitting, basking in the sun, drinking water or just sleeping. I was very surprised when we saw a lioness with cubs peacefully sleeping--occasionally raising her head to see if everything was fine. Not worried at all. The most memorable sighting was that of a lioness in the act of stalking and hunting a sambar deer. She was immensely graceful in the fluidity of her movements. I was spellbound. It was National Geographic in the real world. The only spoiler was a horde of tourists who seemed incapable of distinguishing between wildlife and a circus show. I fervently hope that the forest department will enforce stricter measures to bring such tourists under control by educating them and vesting the guides with the authority to drive such tourists out of the precincts of the forest should they fail to adhere to the rules. 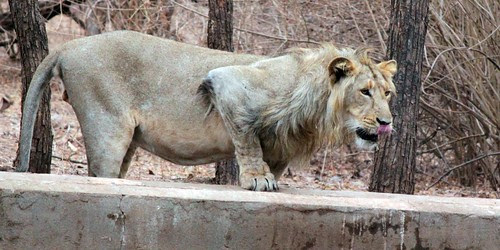 It must also be remembered that Gir lions are perhaps unique in their acceptance of human beings. Having lived with and among the Maldharis and Sidhi tribes, these animals are much more attuned to human beings than one would normally expect.

Apart from lions, Gir's prime attraction, it is also a bird-lovers haven. We were soon to find this out. In complete contrast to the stark summer landscape that makes up the major part Gir, there is a lush and verdant patch in the heart of the forest. This corner of the forest is seldom frequented by folks who have primarily come to see lions. However, for bird-lovers like us, this proved to be a treasure trove. I had never seen so many paradise fly- catchers fly around, flitting from branch to branch, tantalizing and luring us with glimpses till we gave in and decided to wait at that spot. 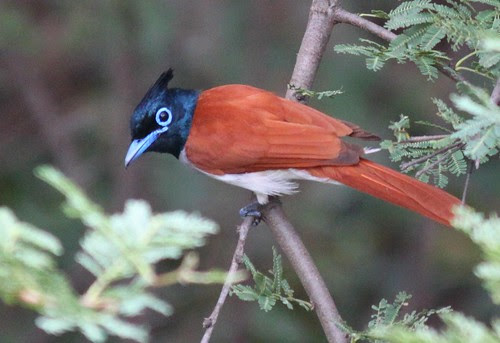 And not only this spot. Our drives around the forest revealed various species of avifauna that absolutely delighted me. 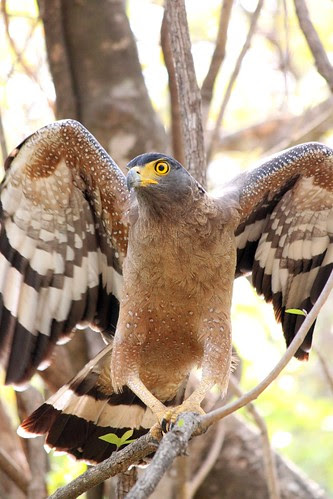 Gir is an entirely different exeprience. While lion spotting may lack the mystery and unpredictability of seeing tigers, it is unbelievably amazing to see lions in their natural habitat. Gir brought back memories of Elsa  and Christian and seemed to proclaim the essential ties that exist between animals and humans. 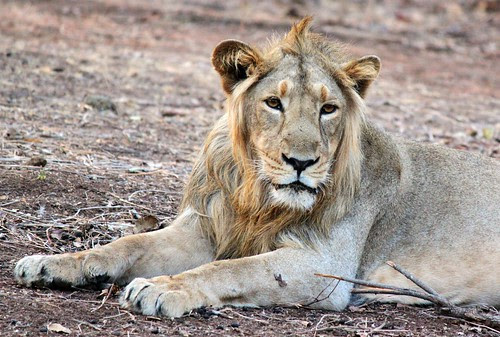