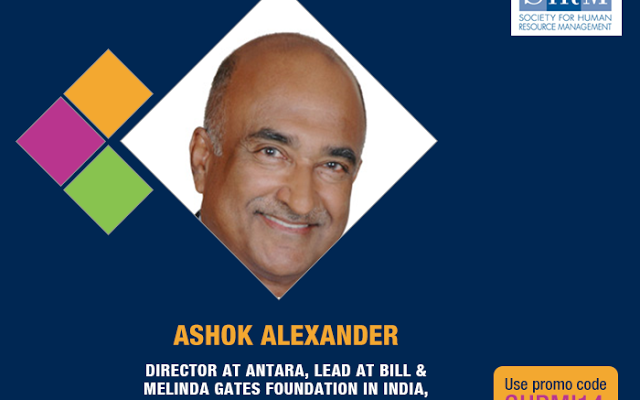 SHRMI14 was all that I thought it would be. The two-day conference had well-chosen and thoughtfully sequenced sessions. I am planning to capture my learning and the insights in a series of posts.


I will begin with the session that resonated with me and touched me the most. It was Ashok Alexander's session on Leadership from the Field. Former Director of McKenzie, Ashok narrated his life changing decision when he chose to work with Gates Foundation on the Avahan project, a public health initiative to prevent HIV/AIDS from gaining epidemic stature in India. After heading he operation for 10 years, he stepped down in 2013 and currently engaged with CARE India.


At the SHRMI14 session, he narrated his foray into the community of sex-workers and the third India this showed him—an India where stark and despairing poverty drove women to sell their bodies not once but multiple times each day, where young boys suffering from AIDS knew and accepted imminent death, where violence was the norm. This world shattered all his known frames of reference and his prior assumptions. Thus began his transformation. Here is a version of the talk on You Tube. He captures one such story in the blog post Leadership Secrets of the Commercial Sex Worker.


In the course of the talk, I asked him what had been his most profound moment of truth. And he said that it happened when one of the women asked him to free them from violence. It was a defining moment of truth for him. And, he was encountering challenges way beyond his known world. A project that had been started with the aim to empower public health and tackle the imminent threat of AIDS became a much larger movement. In an engaging but self-effacing style, Ashok narrated his humbling experience where he learnt that he didn't have all the answers, and didn't necessarily know what to do. And this profound insight taught him some of the fundamentals of leadership. To the question, “What is leadership?” he writes:

“I have learnt that leaders are not born –they emerge from discontinuous circumstances. A leader is someone driven by a sense of noble purpose. A leader serves. She has courage. And she always has hope.”

Ashok's humble narration style further underscored the enormity of the impact. He highlights the folly of presumption and pride of knowledge. He speaks eloquently and evocatively about the plight of a third India that lies conveniently beyond the comfort zone of our daily sanitized life, ignored and hurriedly bypassed if accidentally encountered.  This India taught him and through him us, lessons in life and leadership that we don’t acquire in the most elite of B-Schools.

He crystallized the leadership lessons in a few key phrases:

“Take a leap of faith. Have audacious dreams. Have courage. Face problems with all the humility we can summon.”

Perhaps the most profound learning for me was his reference to the Theory of Discontinuity. In the context of choices, these are opportunities that life offers us to make lateral shifts, the moments when we must choose opportunities which we know will shift our paradigms and destroy our comfort zones forever. It is in these opportunities that lie the possibilities for personal growth.